The SCH pathology lab cover-up was the most notorious because many SCH doctors, who were also UW professors, were involved.

“13.2 Handling a Liver Biopsy Specimen for Suspected Metabolic Disease:
At least two cores of liver tissue should be obtained. … Freeze one core of liver tissue or one slice of a surgical biopsy specimen in anticipation of need for biochemical or genetic analysis.”

1. One of the two cores, intended for biochemical or genetic analysis, was missing. The surgeon, Patrick J. Healey, MD, told the parents that he took two good specimens (below).

2. The parents were told that the patient’s original pathologist was replaced. In the 2nd page of the pathology report, Erin R. Rudzinski, MD wrote, “Preliminary findings were reviewed with Dr. Simon Horslen on 4/19/13 at approximately 14:30h”. Dr. Healey told the parents in the 4/18 afternoon that the report should have been out when he delivered the picture. Who was the original pathologist?

4. Many other cover-ups are marked in the pathology reports (below): 1 – no clinical history for a patient with a 10-day stay; 2 – there was a 3rd pathologist, with initial [MA] which is identical to the initial of SCH lab director, Michael Lee Astion, MD, PhD; etc. Three pathologists, one hepatologist, and one surgeon were involved in this fraud. At least two were medical directors. (PDF) 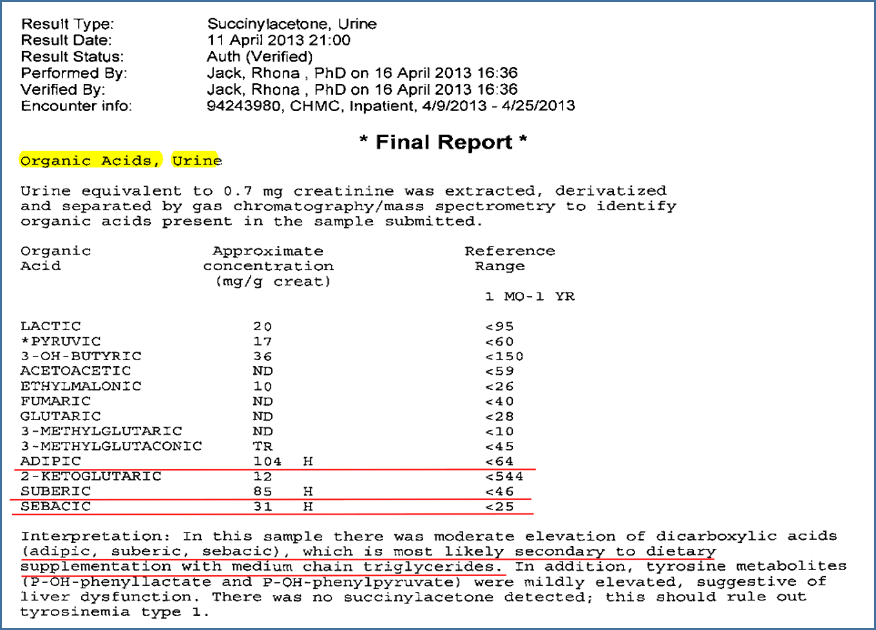 2. The SCH biochemical lab made up an excuse to hide the diagnosis, which can be found using another urine organic acids lab (PDF) with a specimen collected eight hours before the critical event. The elevated dicarboxylic acids are indicative of FAOD. However, the lab report, signed by Rhona Jack, PhD, attributed the elevations to dietary MCT while the formula that the patient was given, NUTRAMIGEN, has no MCT (PDF).

This lab pointed to the patient’s secondary FAOD, ACAD9 deficiency, which was confirmed by another source. Both BCM and CCHMC refused to release the raw data.