SCH doctors closely monitored the poisoning by testing ammonia regularly. None of the hepatologists of CHP, OHSU, and CCHMC tested the patient’s ammonia.

Above graph shows ammonia levels and diets. Green boxes on top are diets, the line shows the ammonia levels, and blue boxes on bottom are major events.

The graph shows that ammonia increased whenever the patient was given formulas. It decreased when he was given glucose (D5, D10) or a low fat diet.

The parents did the right thing after the discharge; they gave him a low-fat diet, considering his liver cirrhosis. His ammonia dropped to 25 in a month.

1.In Aug 2013, when the father asked Karen F. Murray, MD about the patient’s thinning limb muscles, reddening hair, fishy odor, large belly and significant weight loss - the symptoms from protein-energy malnutrition (PEM) - she neither addressed his questions nor documented them (PDF), likely because his PEM was caused by the SCH acute starvation. (PDF) However, the acute starvation caused his body weight to drop from 50 percentile to less than 5 percentile as shown in the growth chart. Instead of correcting the excessive protein in the patient’s diet then by adding carbohydrates, she took this chance to increase Pregestimil intake by 20%. The patient became weak and lethargic. His ammonia slowly climbed in the next several months before a terrible incident happened (below). Considering she was the GI head, the parents thought that she knew the diagnosis and made this suggestion to harm the patient on purpose. 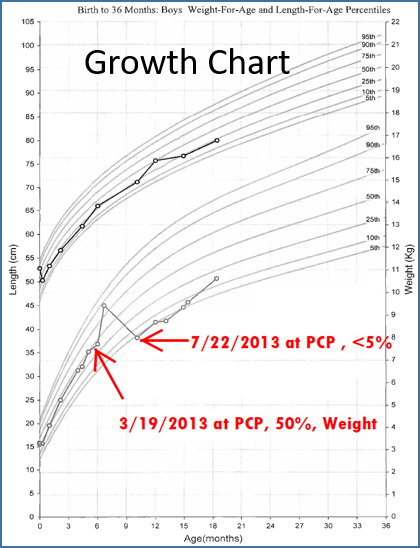 2. In Dec 2013, Simon P. Horslen, MD convinced the father that his son did not have an FAOD by using a genetic report (PDF) from Baylor College of Medicine (BCM), signed by [glossary]Christine M. Eng, MD and Yaping Yang, PhD. The parents then gave the patient full eggs, and did not notice that he got sick quickly from egg yolk. Soon, he was getting worse and looked like he was dying on New Year’s Eve. This near-death experience convinced the parents that their son had an FAOD and changed his diet immediately. His GFR was still critically low at 44 (normal > 120) a week later, meaning his kidney was losing its function. (PDF) His ammonia returned to normal range after 3 months. However, SCH continued denying his FAOD and making harmful suggestions. (PDF) In July 2014, the parents took their son to Children’s Hospital of Pittsburgh (CHP) of UPMC.