WA state CPS and DOH helped SCH cover their crimes. The CPS and hospitals’ cover-ups put the family in a difficult position.

The parents decided to take the patient to Oregon, not staying with SCH transplant program. However, WA Children Protective Service (CPS) visited the night before their OHSU appointment.
The parents had to either follow the order to poison their son or possibly let him be taken away by the CPS for not giving him enough long chain fat. 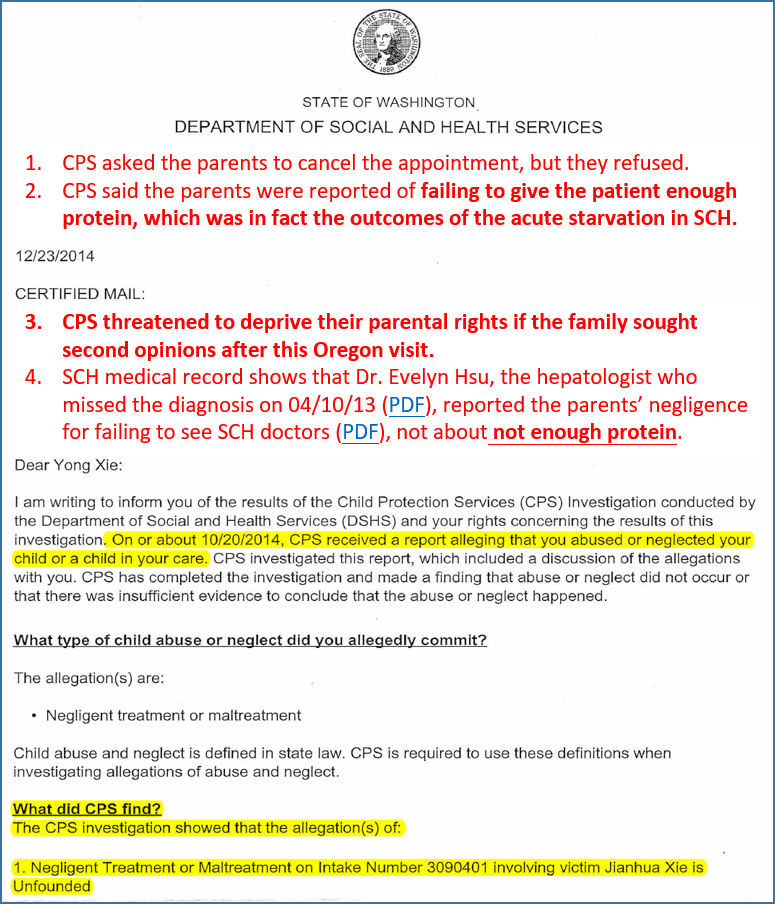 Whoever made the false report was attempting a medical kidnapping! (Evelyn Kanyu Hsu, MD: PDF1 on diagnosis miss, and PDF2 on CPS)

Thankfully, the WA CPS cleared the parents, finding the claim “Unfounded”. US hospitals often divert the parents’ anger to CPS through medical kidnapping: all beginning from the doctors’ false accusation of the parents’ negligence. National media demonize CPS so that the parents become protective. Some children are taken away by the CPS. And often times, these children die under foster care (PDF). Thus, hospitals escape their responsibility. Watch shocking videos below:

WA state DOH covers for SCH by claiming that the ordeal with the patient’s pathology lab was a normal practice and refusing to investigate the patient’s diagnosis. On the contrary, the DOH will punish any staff who causes a hospital loss. A former SCH nurse, MS Kimberly Hiatt, committed suicide (PDF) after she was punished by the DOH when she admitted her negligence to a co-worker.

Back to the visit in Oct 2014. Yasemen Eroglu, MD of OHSU found that the patient’s pancreas was injured as well. She consulted an OHSU metabolic doctor and then made the suggestion to use medicine to absorb long chain fat. It was an inevitable treatment after three hospitals denied the patient’s FAOD condition (below). WA DOH, CPS, SCH, CHP, and OHSU put the parents in a difficult position. But Dr. Eroglu kindly offered the parents another choice, “I will refer you to any doctor you choose if you still have a concern!” The parents chose William F. Balistreri, MD of Cincinnati Children's Hospital Medical Center (CCHMC). 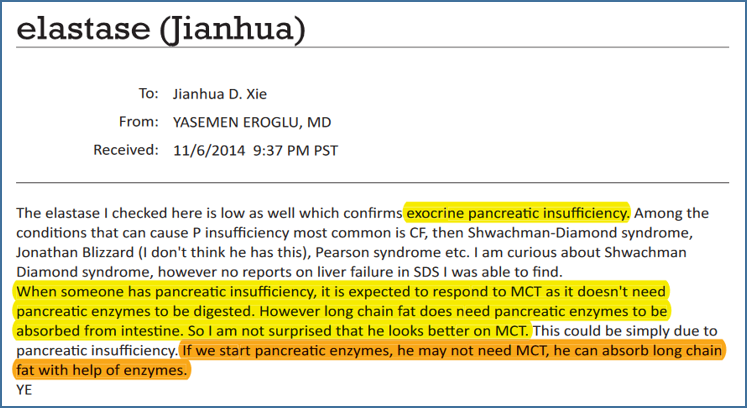